Few people can claim to have made the “Lambeau Leap,” rappelling down the side of Lambeau Field, home of the Green Bay Packers. Sandy Fletcher is one of them. Her 2016 adventure, which raised money for the Special Olympics of Wisconsin, was one of the many ways she chooses to give back to her community while encouraging camaraderie among her team.

“It’s a wonderful cause,” says Sandy, who leads Morgan Stanley’s Green Bay branch. “When I heard about this fundraising opportunity, I emailed everyone in the office and asked: “Who wants to see me jump off this building?” The team hit their $2,500 goal in two days, and did it again the next year, raising even more when a colleague joined her.

The team still goes “all in” each year for the Special Olympics, now through its Polar Plunge, and many other charities and events. That’s because one of Sandy’s greatest joys is making sure people have fun—and she sure makes giving back pure joy for her colleagues.

As their producing Branch Manager, Sandy relishes a dual role in which she not only serves her own clients as their Financial Advisor but also manages people. “I love working with clients but also with teams and having an impact on their successes and our culture.”

Known as a fierce advocate and coach to women both within and outside of Morgan Stanley, Sandy excels at finding and developing female talent in her branch and within her nine-office complex. To help do so, she brings women together.

Eight years ago, she launched a women’s networking group, an annual gathering of women Financial Advisors, which has led to quarterly get-togethers for women in her office and others nearby. They network, share ideas and job opportunities, and, perhaps most importantly, share their personal stories. “Women need to have a voice,” she says. “And we have to make it known that this business is a wonderful opportunity for women. It starts with us.”

This mom of three daughters remembers first coming to the industry in 1999 to an office of 25 Financial Advisors, not one of whom was female, and having to drive two-plus hours to even see another woman Financial Advisor. “It was crazy, especially since women are so well suited for this relationship-driven business,” she says. “So I try to create opportunities for women to share their power and energy with each other.”

At Morgan Stanley now since 2010 and a manager since 2004, Sandy also works hard to identify potential in the office’s female-dominated support teams, finding ways to help women advance. “Sometimes all they need is a little push to try something they didn’t think they could,” she says. In fact, her greatest advice to women is to not be afraid of failure. “Raise your hand. Don’t be afraid to speak up.”

Born in Wisconsin, Sandy grew up in northern Michigan with her two sisters and brother. They didn’t have a lot, but “I had a wonderful childhood.” Their mom, a state tax collector, expected the girls to grow to be “strong, self-sufficient women.” Their dad, an insurance claims adjuster who “has the greatest sense of humor,” taught them to work hard but have fun while doing it.

A strong athlete growing up, Sandy loved just about every sport, but her absolute favorite was basketball. She still waterskies and swims and appreciates the huge life lessons she’s learned from sports, like “teamwork, competition and how to handle success and failures.” She went to Ferris State on a basketball scholarship, then to Michigan State, where she earned a master’s degree in clinical social work, skills she still leverages every day listening to and helping others.

After graduation she moved to North Carolina for a management job, where she quickly rose through the ranks and led a team of more than 180. Over the next 10 years, she met her husband, a licensed contractor, and started a family. But raising a one, a three and a five-year-old so far from home, she really wanted to “come back to the Midwest.” That’s when she landed a job as a Financial Advisor at Merrill Lynch, relieved to be responsible for “just myself,” and moved her family to Green Bay. She and her husband agreed to spend time down south during the colder months when they retire.

Their daughters, now 21, 23 and 25, are now out of the house with careers as an engineer, a teacher and a soon-to-be businessperson, “all doing what makes them happy.” With mom as their role model, they’ve never been afraid of adventure. Her oldest, as a seventh grader, traveled with a nonprofit group to the Amazon Rainforest. The next year, mom joined her in Africa, where they helped build a school. Sandy has traveled with her two oldest daughters to France, Spain and Italy, and the two girls went together to the Arctic. This year, Sandy and her daughters are off to Egypt. “I’ve tried to expose them to life outside of Wisconsin, and I think it’s helped them become more independent,” she smiles.

For Sandy, recently being named a Morgan Stanley MAKER trailblazing women of accomplishment nominated by their peers—was “one of the most humbling and rewarding experiences of my professional career, because it’s from your peers. That’s more meaningful than anything.” She’s also proud to have last year been named one of On Wall Street’s Top 75 branch managers.

Though she has thoroughly enjoyed being a branch manager, Sandy will step down from that role in April after 15 years, enabling her to focus on her clients as a full-time Financial Advisor once again.

On her office wall is a plaque that reads “It’s a Wonderful Life.” She loves the movie but really tries hard to create that for herself and others. “I like to surround myself with positive people and make it fun to come to work every day,” says Sandy. “You have to be the driver, not a passenger, in life, and to remember to bring others along with you.” 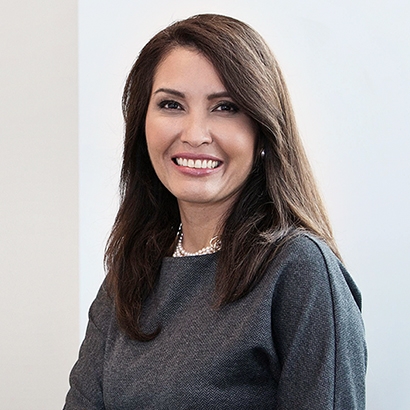 Fighting Fear and Advocating for Women 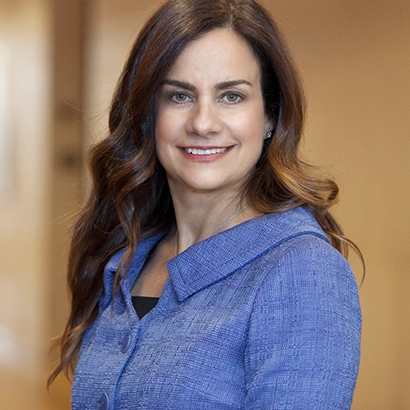 Financial Advisor Monica Woodward at The Clarity Group in Houston specializes in helping women who are blindsided by divorce.