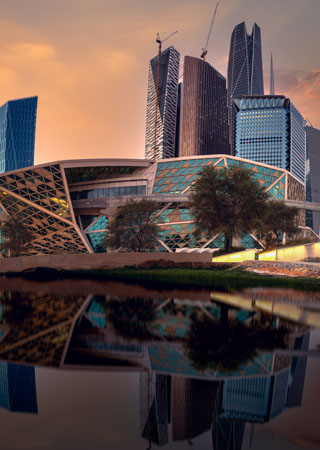 Watching crowds of young men and women masquerading in anime and Hollywood superhero costumes, visitors to Riyadh in March might have forgotten they were in Saudi Arabia. At a time of high oil prices in the aftermath of Russia’s invasion of Ukraine, the Kingdom nears the halfway stage in an ambitious program devised by Crown Prince Mohammed bin Salman, a program enacting social and economic reforms designed to wean the economy off its dependence on the oil sector. Foreign investors have poured $9 billion into the Saudi equity market in the first quarter of 2022, exceeding the approximately $7 billion during 2021.1

The economy grew 9.6% in the first quarter of 2022, the highest growth rate since 2011, driven by a 20% increase in oil sector contributions.2 The International Monetary Fund (IMF) estimates the Saudi economy will expand 7.6% this year, more than double the 3.2% growth recorded in 2021 and for the first time in Saudi Arabia’s history the IMF estimates the GDP to exceed $1 trillion in 2022.3 To be fair, oil prices were already climbing as post-COVID demand returned before the shock of Russia’s invasion propelled prices to levels not seen for around a decade. And as the world’s top oil exporter, Saudi Arabia has benefited from the price hikes.

There is a mood of optimism in the Saudi air. Consumer confidence indicators are at all-time highs, where a recent Ipsos survey found that 92% of Saudi respondents thought the country was going in the right direction,4 an overwhelming vote of trust after the Kingdom survived the twin shock of the pandemic and drop in oil demand and prices.

Back in 2019, we marveled at the pace of social reforms (“The New Saudi Arabia”), designed to make the country a more attractive place for its own citizens, especially the under 35s who make up more than 50% of the 35 million population,5 and help draw tourists. But we also wondered if the government could seriously make progress to create an economy that was not so reliant on oil sector growth.

The fast pace of social reforms has continued. Women are now allowed to drive and work in fields previously only limited to men. In fact, more than 33% of Saudi women now participate in the labor force, a significant surge since 2018.6 Restaurants are no longer required to have partitions separating single men from families and in 2018, for the first time in more than 35 years, commercial cinemas are allowed to operate in the country. In addition, Saudi Arabia has joined the select list of countries hosting a Formula 1 Grand Prix race and entertainers ranging from WWE wrestling stars to Cuban-American rapper Pitbull and Canadian popstar Justin Bieber have performed in front of hundreds of thousands of fans.

Oil remains central to the Saudi economy although economic and fiscal reforms have started to show results (Display 1). The country is still reliant on government spending and remains tied to oil price gyrations. Riyadh posted a budget surplus of $15.3 billion in the first three months of 2022, its first surplus in nearly 10 years, after a deficit of 2.7% of GDP last year.7  This surplus accounts for 64% of the projected $24 billion or 2.5% of GDP Riyadh had forecast for this year.8 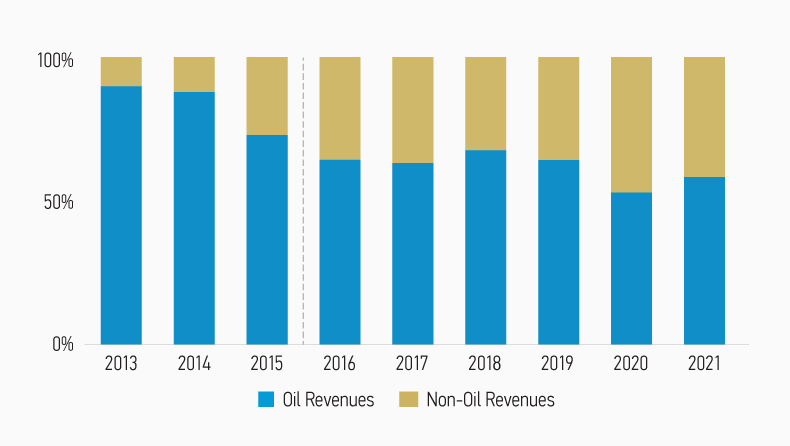 Inflation is rising in much of the world to levels not seen for years, but in Saudi Arabia it’s relatively subdued.  In fact, the Kingdom has lower inflation than most countries globally and in the emerging markets.9 There are issues though. While the official April CPI was 2.3%, prices on many basic food categories appear to be well over 10%.10  We believe the government has the tools to control inflation, such as reducing the 15% VAT rate or offering citizens cost-of-living allowances to counteract rising food inflation. While we are not sure a demand subsidy will counteract food inflation, both a VAT reduction and cost-of-living allowances should theoretically support Saudi consumption.

To move beyond oil, the government is banking on Vision 2030, a plan unveiled by Crown Prince Mohammed in 2016 to restructure the economy and develop tourism and entertainment projects. The government sees tourism as a key element of their reform plan and the single largest source of new jobs. Currently, a huge number of Saudis leave the Kingdom for holidays, spending around $24 billion a year elsewhere.11 If some of that money can be spent locally, that would provide a huge boost to the economy. Critics argue that the progress has been slow in some areas, but things are clearly moving in the right direction.

The Public Investment Fund (PIF), the main Saudi sovereign-wealth fund, has invested in a series of mega-projects to develop parts of Riyadh and build new cities and resorts by the Red Sea to boost non-religious tourism. It’s a remarkable change in attitude given that Saudi Arabia didn’t even issue tourist visas until 2019 but these days international travelers can procure an e-visa with a few simple clicks.

The most ambitious project is Neom, a $500 billion vision of a new city that aspires to be a luxury resort as well as an innovation hub focused on “industries of the future.”  By the end of 2025, Neom anticipates as many as a million visitors arriving for a holiday or a business event - the first hotel is expected to open by the end of 2022. Management expects Neom’s international airport to be operational by 2025 with a capacity of 25 million passengers per year. Beyond tourism, Neom inked a $5 billion green hydrogen plant to come online in 2025, for its first major industrial project.

The green projects are part of the plans by the Kingdom to invest $180 billion to cut its carbon emissions to net zero by 2060. The private sector is also starting to do its part as five Saudi corporations, including both the world’s largest oil producer and national airline, have joined the MENA region’s first voluntary carbon market, backed by PIF.

North of Jeddah, the Red Sea Tourism Project has secured funding and construction loans. The first phase of the two-phase project includes developing five islands, 16 hotels (including 14 marine resorts) with a total capacity of 3,100 rooms and two resorts, in addition to two yacht marinas, entertainment facilities and an airport.  The aim is to host the first guests sometime next year and to complete the project by 2030. Risks to projects are long construction lead times and possible capacity bottlenecks in the contractor sector.

One area of focus that has slowed recently is foreign direct investment (FDI), where the global macro backdrop was not supportive due to COVID and low oil prices. The Kingdom had hoped to attract $10 billion in annual inflows but only managed $5.5 billion in 2020.12 Last year, the government announced new plans to attract $100 billion in annual FDI by 2030. Shareek (which means partner) is another prong of the economic reform, designed to drive investments to domestic businesses. Under Shareek, private companies invest a percentage of their profits in local investments, where the goal is to raise the private sector’s share of GDP from 40 percent to 65 percent by 2030.

Saudi Arabia still has a lot of work to do to fully achieve the ambitious goals of Vision 2030 and diversify away from oil.  The high oil price will ease the pain of the economic reforms that are needed. The targets are ambitious but with strong leadership and a young and educated population a lot can be achieved.