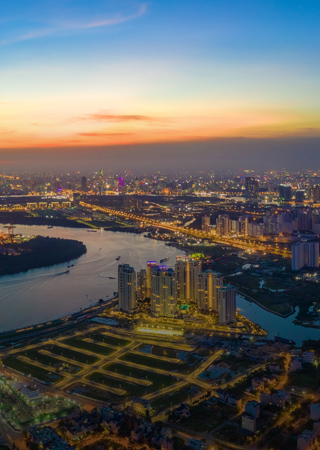 On a recent visit to Hanoi and Ho Chi Minh City, we met with entrepreneurs, corporate executives, and policy makers. While Vietnam needs to navigate near-term challenges from tighter macroeconomic and financial conditions, this “next gen” emerging market country should see its economy continue to thrive over the coming decade. With a relatively well-educated population of nearly 100 million people, and continued inflows of capital into the highly productive manufacturing sector, Vietnam should benefit from a young and tech-savvy middle class, which is expanding at a rapid rate.

Ever since joining the World Trade Organization back in 2007, Vietnam’s economy has expanded 6.7%, faster than that of any Asian country apart from China.1 Recently, Vietnam came out as a clear winner in the U.S.-China trade war, benefiting from Western economies looking to reduce their exposure to China (Display 1). While Beijing’s growth has been revised downward this year, Vietnam’s was revised upward to 7.5%, outpacing China’s and much of the rest of the world.2

×
DISPLAY 1:
The U.S. is Relying More on Vietnam

U.S. imports from Vietnam as a share of those from China 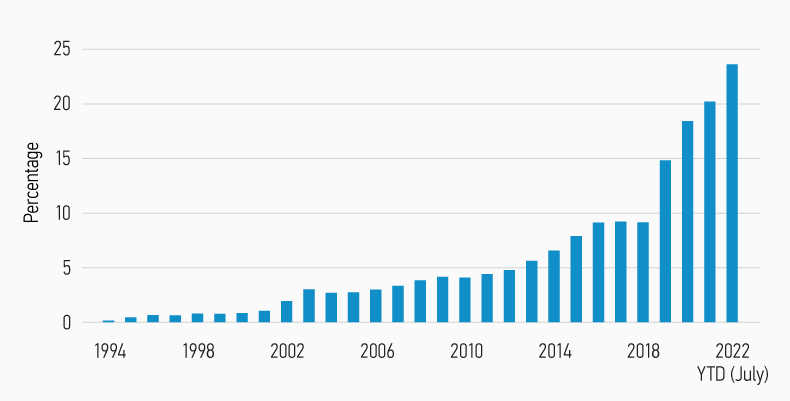 ×
DISPLAY 1:
The U.S. is Relying More on Vietnam

U.S. imports from Vietnam as a share of those from China

Education is one reason for the country’s success. Facing a rapidly growing population, Vietnam made large public investments in primary education during the 1990s, which today scores higher on standardized PISA (Programme for International Student Assessment) tests than most other advanced economies.4 This is one of the forces drawing in foreign capital: productive human capital at competitive wage levels.

The growth has been relatively inclusive: middle-class households are forming at a faster pace in rural areas than urban areas, and Tier 2 and 3 cities are mushrooming around new manufacturing hubs.5 Women have fared well. Vietnam’s female to male labor participation rate is one of the highest in the world at 88%.6  Wage growth has been steady and in line with FDI (Foreign Direct Investment) growth (Display 2).7 By 2030, the country is expected to add an additional 36 million people to the middle class, ultimately  reaching 76 million people.8  By some estimates, Vietnam will become one of the ten largest consumer markets in the world by 2030, bigger than Germany or the U.K.9  The new middle class is both young —median age 32.5 — and tech savvy — smartphone usage estimated at 85% of adult population.10 As more people gain the purchasing power to consume goods and services, that will lead to growth for higher priced goods and services such as jewelry, organic dairy, and travel.

All of this provides plenty of investment opportunities for companies selling to the rising middle class. Despite a rapidly digitizing and urbanizing population, more than 80% of all retail transactions occur in informal mom-and-pop stores or wet markets.11 Therefore, modern retail stores, and everything they offer to consumers — consistency, quality, cleanliness — are growing rapidly.  One publicly listed retail company has opened 4,000 new stores over the past five years.12

Digital infrastructure is expanding as well.  Vietnam’s tech ecosystem is still in its early stages, but the talent pool is growing quickly. Software engineers are relatively inexpensive, with rates 20% cheaper than those offered in India.13 At the largest private university for IT engineering degrees, student enrollment grew 70% last year and is up by another 40% this year.14

We spent time visiting tech companies, from a publicly listed company using engineers to solve problems for Fortune 500 firms to startups serving the B2B segment, including those seeking to digitize the millions of mom-and-pop stores. Fintech is also gaining momentum and has plenty of room to grow, given the high level of cash transactions.  For example, the leading messaging app in the country, which counts 70% of the population as active users, is moving into digital financial services.15

While the outlook appears bright, there are several risks facing the economy.  Vietnam remains highly linked to the U.S. and Chinese economies, which account for a combined 35% of its exports.16 Given the outlook for these two large economies over the coming year, Vietnam could face a temporary slowdown.  Additionally, Vietnam has witnessed a prolonged credit cycle over the past five years, which could pose risks to the financial system as interest rates rise and the domestic economy slows down. Some locals are growing uneasy over recent government crackdowns centered on the real estate sector, and the impact it is having on the local corporate bond market.

Despite these risks, we believe Vietnam is one of a few countries ushering in the next generation of investing in emerging markets. Strong levels of human capital and foreign investment are creating a large, young, and tech-savvy middle class. The country is a beneficiary of geopolitical fallout between the U.S. and China, and has become an important player in technology supply chains. Benefiting from these tailwinds, Vietnam should continue globalizing in a deglobalizing world.