As expected, the Federal Open Market Committee (FOMC) kept the range for the federal funds rate unchanged at 2.25% to 2.50% at the conclusion of its May 1 meeting. The Federal Reserve (Fed) noted that in light of global economic and financial developments and muted inflation pressures, the Committee will continue to be “patient” as it decides what future adjustments to the fed funds rate are appropriate. FOMC participants believed the most likely outcome for the U.S. economy would be sustained expansion of economic activity, with strong labor market conditions and inflation nearing its 2% target.

However, the Trump administration’s decision on May 10 to raise tariffs to 25% on $200 billion of Chinese goods and its threat to levy tariffs on another $300 billion of Chinese goods following the next G20 meeting in June stoked concerns that the U.S.-China trade war could be longer and more pronounced than expected. The Trump administration’s decision on May 29 to threaten Mexico with a 5% tariff only exacerbated these concerns and raised the specter of additional U.S. trade wars with other countries. 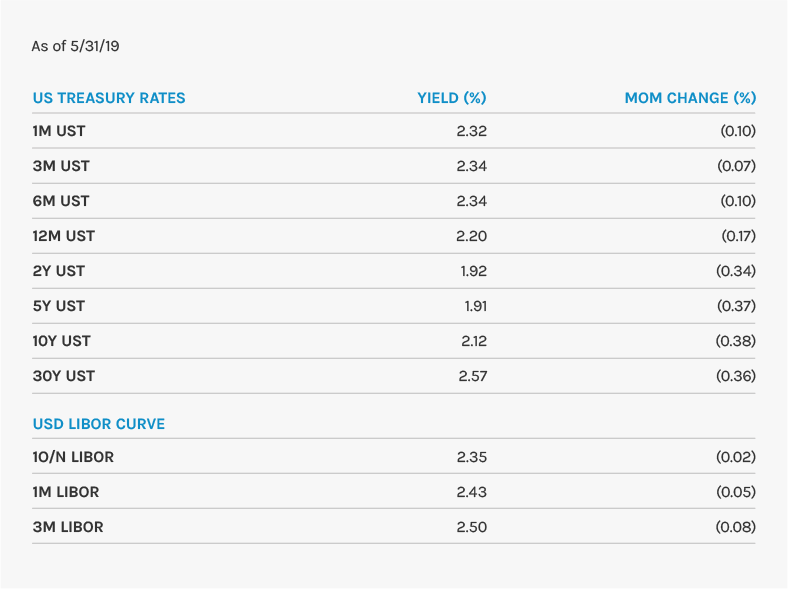 While the European Central Bank (ECB) did not hold a policy meeting in May, the ECB released the results of its semi-annual Financial Stability Review on May 29, highlighting the potential economic risks to the euro zone. The report noted that asset prices could move substantially lower if the U.S.- China trade war continues to escalate and weaker gross domestic product (GDP) growth persists. The report also warned that global leveraged loans could be significantly impacted by weaker corporate earnings and European banks would continue to struggle to meet their return on equity targets.

On the economic data front, consumer prices in May were only 1.2% higher than a year earlier (down from 1.7% in April 2019 and the lowest level since April 2018), putting increased pressure on the ECB to take additional action in order to meet its 2% inflation target.

In the U.K., the pound continued to weaken versus the euro following the announcements of a delayed Brexit and Theresa May’s resignation as prime minister. Given continued uncertainty around Brexit, the Monetary Policy Committee (MPC) voted unanimously to maintain its bank rate at 0.75% during its meeting ending on May 1. While the MPC kept rates on hold, it revised up its 2019 growth forecasts to 1.5% from 1.2%, noting better-than-expected GDP growth to start the year.

As widely expected, the Fed voted unanimously to maintain the target range for the federal funds rate at 2.25% to 2.50% at the conclusion of its April 30/May 1 FOMC meeting. The Committee repeated language from its previous meeting, saying it “will be patient as it determines what future adjustments to the target range for the federal funds rate may be appropriate.’’ With mixed economic data and increased geopolitical headlines throughout the month, Treasuries rallied, with the 10-year yield ending the reporting period at 2.12%, a 17-month low. Three-month LIBOR also ended the reporting period at a recent low, setting at 2.5% on May 31, down 8 bps month-over-month. With the Fed indicating that it would be on hold in the near term, and LIBOR continuing to grind tighter, we opportunistically added duration to the portfolio, purchasing fixed-rate securities in the 6- and 9-month tenors.

With the Fed indicating during its April 30/May 1 meeting that it would be on hold in the near term, we added duration to the portfolio, investing into longer-term, floating-rate agencies and Treasuries up to 2 years in maturity. We also invested into shorter fixed-rate Treasuries and agencies up to 6 months in maturity. We continue to manage the portfolios to be responsive to changing market conditions and to invest a significant portion of most portfolios in overnight repurchase agreements.

At the short end of the curve, yields for variable rate demand obligations (VRDOs) dropped throughout the month of May. The SIFMA Index,4 which measures yields for weekly VRDOs, fell 0.70% over the course of the month to 1.42%. At the long end of the money market range, there was very little new financing and the Municipal Market Data (MMD) One-Year Note Index5 closed the month down 0.02% to 1.68%. June typically has some of the largest coupon inflows of the year, which may place additional downward pressure on variable rate yields. We maintain our emphasis on high levels of liquidity and relatively short duration as we watch how monetary policy unfolds.

2 The Portfolio will be required to price and transact in their shares at a floating net asset value (“NAV”) and will be permitted to impose a liquidity fee on redemptions or temporarily restrict redemptions in the event that the Portfolio’s weekly liquid assets fall below certain thresholds.

4 The SIFMA Index is issued weekly and is compiled from the weekly interest rate resets of tax-exempt variable rate issues included in a database maintained by Municipal Market Data which meet specific criteria established from time to time by The Bond Market Association. The index is unmanaged and should not be considered an investment. It is not possible to invest directly in an index.

The views and opinions expressed are those of the Portfolio Management team as of May 2019 and are subject to change based on market, economic and other conditions. Past performance is not indicative of future results.

Past performance is no guarantee of future results. This document represents the views of the portfolio management team. The authors’ views are subject to change without notice to the recipients of this document. It does not reflect the opinions of all portfolio managers at Morgan Stanley Investment Management and may not be reflected in other strategies and products that the Firm offers.

This material is a general communication, which is not impartial and all information provided has been prepared solely for informational and educational purposes and does not constitute an offer or a recommendation to buy or sell any particular security or to adopt any specific investment strategy. The information herein has not been based on a consideration of any individual investor circumstances and is not investment advice, nor should it be construed in any way as tax, accounting, legal or regulatory advice. To that end, investors should seek independent legal and financial advice, including advice as to tax consequences, before making any investment decision.

Current and future portfolio holdings are subject to change. The forecasts in this piece are not necessarily those of Morgan Stanley, and may not actually come to pass.

Please consider the investment objectives, risks, charges and expenses of the fund carefully before investing. The prospectus contains this and other information about the fund and can be obtained by contacting your financial professional, or by downloading a copy at www.morganstanley.com/liquidity. Please read the prospectus carefully before investing.

STABLE NAV FUNDS
You could lose money by investing in the Fund. Although the Fund seeks to preserve the value of your investment at $1.00 per share, it cannot guarantee it will do so. An investment in the Fund is not insured or guaranteed by the Federal Deposit Insurance Corporation or any other government agency. The Funds’ sponsor has no legal obligation to provide financial support to the Fund, and you should not expect that the sponsor will provide financial support to the Fund at any time.

FLOATING NAV FUNDS
You could lose money by investing in the Fund. Because the share price of the Fund will fluctuate, when you sell your shares they may be worth more or less than what you originally paid for them. The Fund may impose a fee upon the sale of your shares or may temporarily suspend your ability to sell shares if the Fund’s liquidity falls below required minimums because of market conditions or other factors. An investment in the Fund is not insured or guaranteed by the Federal Deposit Insurance Corporation or any other government agency. The Funds’ sponsor has no legal obligation to provide financial support to the Fund, and you should not expect that the sponsor will provide financial support to the Fund at any time.

The Tax-Exempt Portfolio may invest a portion of its total assets in bonds that may subject certain investors to the federal Alternative Minimum Tax (AMT). Investors should consult their tax adviser for further information on tax implications.