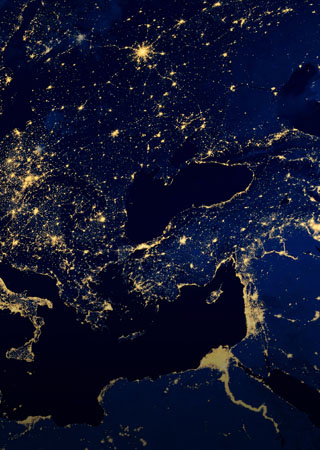 Russian President Putin’s decision to launch a full invasion of Ukraine has, in a matter of days, taken the Russian economy from a globally integrated economy of scale and potential into one isolated and on a trajectory toward pariah status.  Russia is being hit with unprecedented sanctions by the EU, UK and US and others, meant to be punitive in nature and only increasing in breadth and depth over the past few days.  Russia announced its own retaliatory sanctions and domestic policy responses on February 28th.

The initial sanctions enacted by the G7 and EU countries last week were significant but manageable; however, the ones built up over the weekend are now essentially unprecedented for an economy the size of Russia.  Their main goal is to target the financial system punitively for Russia’s attack on Ukraine—the ability of Russia to access the international capital markets, international payments systems (SWIFT), and even its long accumulated foreign reserves (Breakdown of Russian International Reserves - Pre Sanctions on Central Bank – Display 1).

In the years since Russia’s annexation of Crimea in 2014, Russia has been conducting fiscal and monetary policies seeking to insulate its economy from external vulnerabilities. In response to these latest sanctions, Russia itself has announced its own counter measures on the morning of February 28th, including freezing foreign stock holdings, hiking interest rates to 20%, banning citizens from moving capital abroad, and forcing the conversion of foreign exchange revenues from exports in rubles—in other words, Russia has imposed capital controls.1

The announcements are continuing but many lines have already been crossed, disrupting economic norms and practices that have been in place for decades.  Once implemented, history and this specific situation strongly suggest that comprehensive sanctions and capital controls are likely to remain.  Beyond the direct impact, these will have a chilling effect on businesses, foreign investment and perception of Russia for years to come. As long as Putin remains in power, the direction of the Russian economy appears headed toward isolation and autarky.

From a global perspective, the Russian invasion of Ukraine could affect the global economy via three channels—economic growth, trade and monetary policy.  The hit to economic output likely will be minimal as both countries combined account for only 2% of global GDP and trade.2 Exports to Russia and Ukraine combined account for well under 1% of GDP for each major economy such as the US, the Euro Area, China or Japan.3

Spillover caused via the commodity markets, however, could be much more material as Russia’s share in global commodity production is large for major energy sources such as oil (11%) and gas (17%), and also for precious metals (11%), industrial metals (9%), as well as wheat (11%), and fertilizers (8%).4 Ukraine’s share in global exports is large for wheat (7%) and corn (22%).5 There is also a risk to disruption in Russian PGM (platinum group metals) supply, with the country accounting for 12% of global platinum mine supply and 37% of global palladium supply, both of which are critical in the production of automobile catalytic converters (Display 2).6 Analytically, commodities generally find their way to market. From a historic perspective, oil and gas exports from Russia continued to flow throughout the Cold War.  Europe relies heavily on Russia for gas imports, and gas accounts for a relatively large spending share in European countries such as Germany. Although the EU has reduced its reliance on Russian gas, Russia still provides about 40% of EU gas supply.7 Lastly the impact on global inflation and monetary policy could lead to inflation being stickier than expected and market expectations of peaking inflation in March/April could be pushed out further. 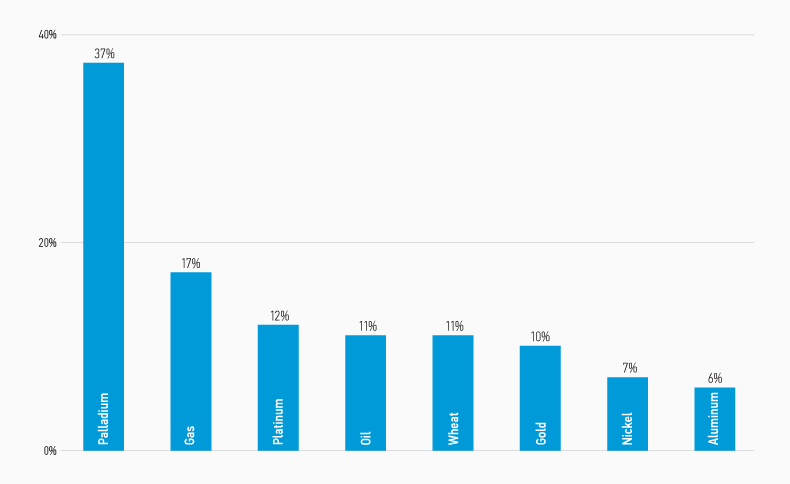 History suggests that such disruptive geopolitical events are discounted by global markets in the short term, while the underlying economic context tends to prevail over the medium to longer term.  Our work suggests that over 13 major geopolitical conflicts/attacks since MSCI EM inception in 1988, the 12-month forward return for MSCI EM in USD terms is generally positive (+18.5% on average, +3.5% on median basis) with a 70% probability of being positive over the full 12-month period after onset of the event (Display 3).8

The index performance is provided for illustrative purposes only and is not meant to depict the performance of a specific investment. Past performance is no guarantee of future results.  See Disclosure section for index definitions.

Similarly, in a broader study of 27 geopolitical conflicts/attacks since 1939, the 12-month forward return for the S&P 500 is generally positive (+6.8% on average, +10.1% on median basis) with a 70% probability of being positive after onset of the event.9

Russia’s attack has swiftly left it isolated on the global stage and is the biggest shock to the country since the fall of Soviet Union. Russia will most likely remain uninvestable for global investors unless there is a change in regime

While overall global economic impact could be muted in the medium term, the commodity price transmission due to  potential supply issues of inflated prices of certain metals and energy support our allocation to select companies in these sectors. Equity markets may remain volatile while the conflict continues in the short term due to higher risk premium, history strongly suggests equities are driven by economic fundamentals longer term, which remains supportive for several countries and themes we have identified in EM.

×
Download PDF
Related Insights
Related Insights
The Big Picture
Key Themes for 2023
Feb 02, 2023
Jitania Kandhari outlines her Key Themes for 2023.
The Big Picture
Emerging Markets: Stepping Into the Spotlight
Dec 21, 2022
Emerging markets are in a much stronger position to outperform developed countries in the decade ahead. Jitania Kandhari explains.
Tales From the Emerging World
The Beijing Put
Apr 07, 2022
Jitania Kandhari and Amay Hattangadi look at China in the context of the evolving global landscape.


There is no assurance that a portfolio will achieve its investment objective. Portfolios are subject to market risk, which is the possibility that the market values of securities owned by the portfolio will decline and that the value of portfolio shares may therefore be less than what you paid for them. Market values can change daily due to economic and other events (e.g. natural disasters, health crises, terrorism, conflicts and social unrest) that affect markets, countries, companies or governments. It is difficult to predict the timing, duration, and potential adverse effects (e.g. portfolio liquidity) of events. Accordingly, you can lose money investing in this portfolio.  Please be aware that this portfolio may be subject to certain additional risks. In general, equities securities’ values also fluctuate in response to activities specific to a company. Investments in foreign markets entail special risks such as currency, political, economic, market and liquidity risks. The risks of investing in emerging market countries are greater than the risks generally associated with investments in foreign developed countries. Stocks of small-capitalization companies entail special risks, such as limited product lines, markets, and financial resources, and greater market volatility than securities of larger, more-established companies. Derivative instruments can be illiquid, may disproportionately increase losses and may have a potentially large negative impact on the Portfolio’s performance. Illiquid securities may be more difficult to sell and value than public traded securities (liquidity risk). Non-diversified portfolios often invest in a more limited number of issuers. As such, changes in the financial condition or market value of a single issuer may cause greater volatility. Cryptocurrency (notably, Bitcoin) operates as a decentralized, peer-to-peer financial exchange and value storage that is used like money. It is not backed by any government. Federal, state or foreign governments may restrict the use and exchange of cryptocurrency. Cryptocurrency may experience very high volatility.

9.  MSIM Emerging Markets Equity team analysis, Bloomberg, FactSet, Haver. The index performance is provided for illustrative purposes only and is not meant to depict the performance of a specific investment. Past performance is no guarantee of future results.  See Disclosure section for index definitions.