After a relative truce for years, hotels and online travel agencies have shifted focus to battling one another for direct access to travelers. Customers can expect some sweet deals, and investors could see significant price swings.

After living in harmony for years, online travel agencies and global hotel brands have started seriously battling over hotel bookings—just in time for peak travel season.

Over the past several months, most major hotel brands have launched campaigns to steer bookings to their own sites, in a bid to save on the 10% to 20% commissions paid to online travel agencies, or OTAs. Travel sites aren't taking this lying down: Many have responded by pushing major brands to the bottom of search results.

In a recent report, “Hotel Brands vs. OTAs: Who Will Win the War," Morgan Stanley Research looks at how this pillow fight could affect investors. Although OTAs are a relatively small channel for the largest brands—and big hotel chains represent less than a third of OTA hotel bookings—this mêlée could result in double-digit stock price movement for the winners and double-digit decreases for the losers.

“If the industry shifts, we see the likelihood of both earnings and multiples changing," says Thomas Allen, Morgan Stanley’s lead gaming and lodging analyst. “There is $125 billion of value that could shift between the two groups."

First launched 20 years ago, OTAs were a “natural evolution of traditional offline travel agencies," says Allen. They have for years represented a small but stable distribution channel for major hotel brands. In the case of one of the world's largest hotel chains, OTAs accounted for just 4% to 5% of reservations between 2004 and 2014. “OTAs are typically viewed as strong 'frenemies' to the lodging industry," he adds.

In the past two years, however, OTAs' share of bookings has increased enough that hotels have taken note; for the largest chain referenced above, OTA bookings increased to 6% in 2015 and was recently approaching 8%—at a time when hotels are at record occupancy and room rates.

OTAs take anywhere from 10% to more than 20% of the price of a reservation—the most of any booking channel—so it is no surprise that the largest brands have stepped up their efforts to book more guests directly.

There is $125 billion of value that could shift between the two groups.

After renegotiating lower booking fees late last year, most of the major hotel brands have launched campaigns aimed at getting their loyalty members to book on their brand sites. In February, one of the largest operators unveiled its largest marketing campaign in history, called “Stop Clicking Around," promoting a 10% discount and free Wi-Fi for loyalty members who book direct.

There are some early signs that the direct-booking initiatives are gaining traction, but as of first-quarter, 2016, earnings calls, OTAs had not seen any meaningful shifts in volume. In the meantime, many OTAs have responded by pushing the major brands down on search results.

While the five largest brands account for nearly half of all US hotel rooms, there is a case to be made for why OTAs may win this fight. “We believe their technology-first focus gives them an advantage versus the hotels when it comes to a number of key attributes," says Morgan Stanley Internet Analyst Brian Nowak. In fact, younger consumers prefer the OTA model and, in the end, the hotel brands' efforts to move travelers to their own sites could “run against consumer behavior."

This isn’t the first time hotel brands have tried to contest the OTAs, and it likely won't be the last. Morgan Stanley expects a resolution in the next six months to a year, with one of four outcomes:

For more Morgan Stanley Research on the outlook for the lodging industry, ask your Morgan Stanley representative or Financial Advisor for the full report, “Global Insight: Hotel Brands vs. OTAs: Who Will Win the War?" (May 18, 2016). Plus, more Ideas. 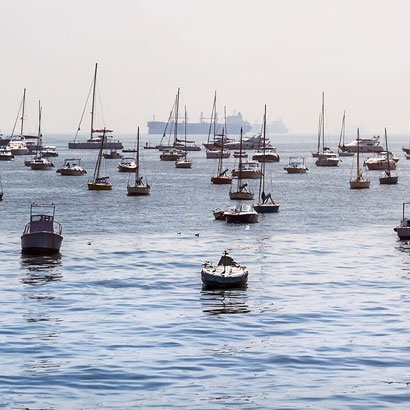 India Hears Call of the Sea