A Green Revolution for Global Chemicals

Oil and natural gas have dominated chemicals manufacturing for decades. But as the world goes green, chemicals are returning to their bio-based roots.

The consumer mandate to go green has reached the chemicals industry, as manufacturers of shampoo, detergents, paints, packaging and other consumer products rethink their use of petrochemicals, turning instead to bio-based and other alternatives derived from renewable raw materials.

We now see a gravitation to bio-based chemicals, as awareness of petrochemicals' environmental impact and the perceived well-being impact increases.

This increased focus by consumers on both wellness and climate change is resulting in a higher willingness to pay a “green premium” for formulations with better-perceived health implications. Consumers are demanding more transparency in product ingredients, formulations, supply chains and sustainable business practices—and manufacturers are listening, according to a recent Morgan Stanley Research report. As a result, this shift to more environmentally friendly chemicals could come sooner than industry-watchers and investors once believed.

“The biochemical landscape is broad, diverse and growing,” says Navina Rajan, equity analyst on the Global Chemicals team and lead author of the report. “We now see a gravitation to bio-based chemicals, as awareness of petrochemicals' perceived impact to well-being and the environment increases among corporates, consumers and governments.” 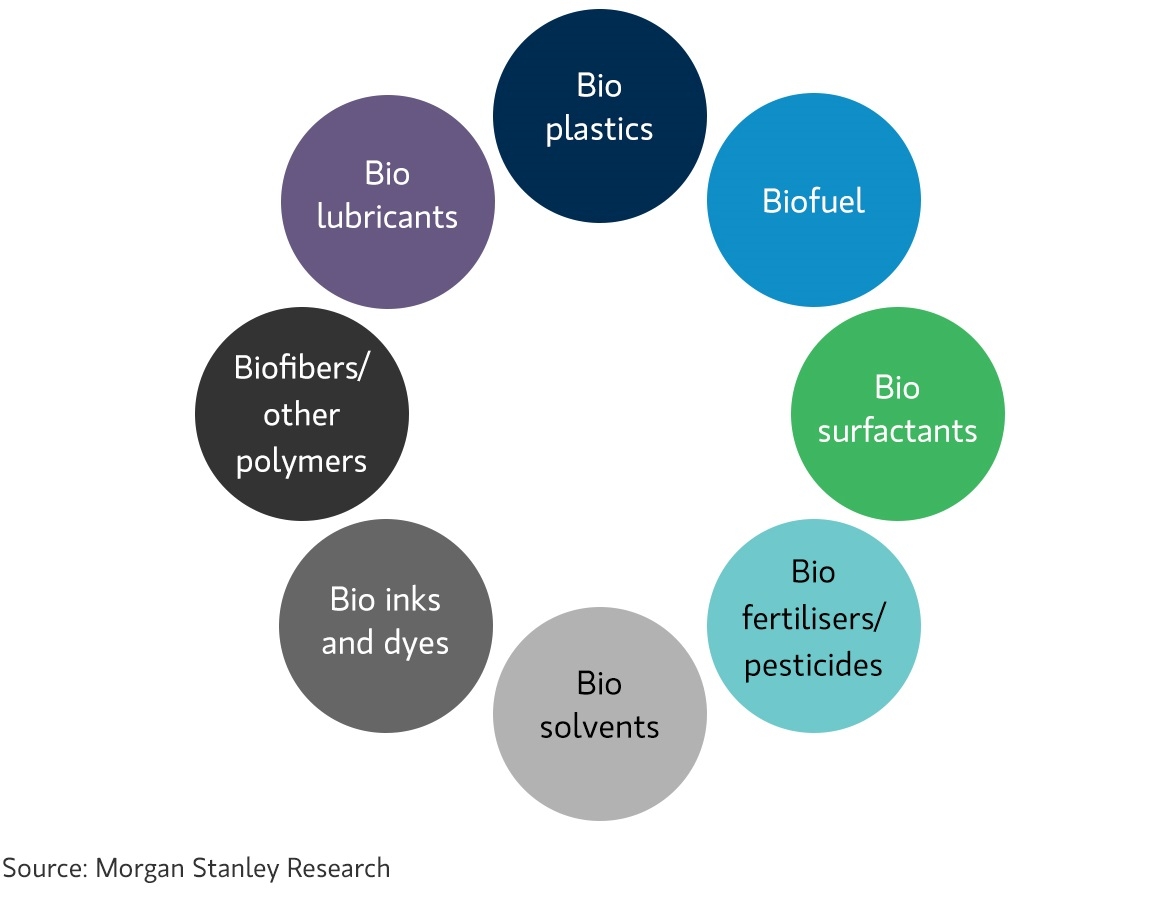 The shift could present significant opportunities for investors. The report notes that one area of this “biosphere”—biosurfactants, present in many personal-care and household products, such as shampoo and detergent—could jump from about 26% of the total surfactant market currently to about 39% by 2030, resulting in a roughly $16.5 billion market.

Further, the analysts believe products in other industries such as industrials, agriculture and food could see increasing use of bio-based surfactants through continued consumer pull, sustainability goals and higher functionality, offering the industry a more attractive and higher growth roadmap than with petrochemical versions.

The Past Is Future

For bio-based chemicals, the current situation marks something of a comeback. Largely derived from sugar or animal and plant oils, they dominated the pre-1950s chemicals industry. By the 1970s, however, petrochemicals, derived from natural gas or oil, had taken over the lion's share of the chemicals manufacturing market. In recent years, the combination of growing environmental concerns, advanced R&D and improved cost metrics have again made bio-based chemicals more appealing.

“Unlike petrochemicals, which derive from just two feedstocks, bio-based materials use a variety of natural feedstocks such as coconut oil, rice bran and guar seeds,” says Rajan.

According to the U.S. Department of Agriculture, bio-based feedstocks are replacing 300 million gallons of petroleum per year in the U.S. alone—or the equivalent of taking 200,000 cars off the road each year in terms of CO2 emissions. By extension, if this 'biosphere' of chemicals was to grow at an annual 5% growth rate, it would equal taking 3.2 million cars off the road in the U.S., according to Morgan Stanley calculations.

Rajan defines the entire biosphere of chemicals as encompassing eight areas, including biofuels, biofibers and biolubricants—with another area, bioplastics, conventionally capturing much of the market's recent attention. However, investors may not realize that surfactants, used primarily in detergents and personal-care products to more easily mix or separate oil and water, could offer significant growth potential, the report notes.

“Among the biosphere of products, biosurfactants have emerged as our area of preference because both penetration rates and growth rates are above average and increasing, end customers are demanding supply-chain changes and are consumers are willing to pay for the products. These are dynamics we find more compelling than in the bioplastics space,” says Rajan.

By 2030, biosurfactants could make up roughly
39% of the total surfactant market

Regionally, Europe is leading the switch to bio-based ingredients from a production, consumer and policy perspective. The region has 224 biorefineries and significantly more government-led bio-based initiatives than either the U.S. or Asia.

This leaves some European companies particularly well-placed to take advantage of this trend, especially those with the largest commercial-scale manufacturing capabilities, and those that have led the way in the technology needed to make products like biosurfactants.

To be sure, challenges remain for manufacturers. Morgan Stanley's analysts caution that higher production costs and scalability are still broadly an issue for manufacturers wanting to dip their toes in green products. Regulatory support will also be needed to foster uptake of biobased products that do not have a strong consumer pull. There is also always the risk that a global growth slowdown or recession could affect consumers’ willingness to pay higher prices for bio-based goods.

Questions about the level of environmental benefit also linger. For example, some experts warn that the harvesting and production of palm oil can still have negative environmental impacts. Another debate is whether bio-based products increase competition for land that would otherwise be used to grow food, although the report’s analysts don’t see this as a roadblock to adoption. Overall size of land use would still be quite small compared to agricultural production and many biobased products use biomass (agricultural waste) as a feedstock.

As the effort to reduce carbon emissions and slow climate change intensifies, bio-based chemicals could be part of an overall solution to reduce fossil-fuel use, curb small format single-use plastic and continue the exploration of sustainable consumer goods options.

What Rising Inflation Expectations Could Mean for Your Portfolio